Some of you will have heard of hip dysplasia and some of you will not have. I am sure you remember at the hospital when they check your babies hips at birth, part of what they were checking is for hip dysplasia. When babies have it there are many different treatments. Some are placed in a spica cast which immobilises the movement in the hips, so allowing them to heal or form properly and others have operations early on. It must be hard for mums and dads to have to see this but from the numerous groups I am now a member of many of these babies go on to be absolutely fine and have no future problems. Having said this there are babies and children who aren’t as lucky and end up having to have quite a few procedures throughout their early years. With my daughter it was a very different case, as with her there was no indication when she was very little.

5 years ago Anya started complaining about pain in her hip, she was 7 years old. It wasn’t constant nor was it so painful that I initially felt there was anything to worry about, I thought it was growing pains or something like that. After a few episodes when I could see she was uncomfortable and then her teacher mentioning it at the end of school I took her to the doctor. We were sent to hospital for an X ray but came back with nothing to show on it. This went on for another 2 and a half years, trips to A&E and being told there is nothing wrong. Then one day a few months after an x-ray was taken I got a call from my GP saying that it had been reviewed and that they thuoght Anya had Perthes disease. This is when blood doesn’t reach the bone and so eventually the bone will deteriorate. Obviously I was very worried and we were referred to an paediatric orthopaedic surgeon at Addenbrookes Hospital.

It was at this appointment that we were told that it definitely wasn’t Perthes disease (huge relief) but it was hip dysplasia (worry again). It was clear from the X rays what the problem was and before I could catch my breath the surgeon was talking of which surgery would solve the problem. Anya’s hip didn’t sit correctly in her hip joint, it was as simple as that and surgery was the only option, if we wanted her to be pain free. It was also explained that if we didn’t operate, early arthritis and a new hip would be likely.

Over the next 6 months we had a few meetings with the surgeon. It was decided that she would have a femoral osteotomy on the right leg which would change the direction the hip sat in the socket. It was major surgery and as I had never seen any of my babies put under anaesthetic before, let alone cut open, bones broken and pinned together, the whole thing was hard to take in. The waiting time was lengthy with the NHS but eventually in November last year (Anya was 11), we went in to have the surgery. 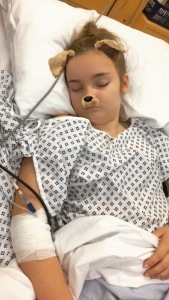 Anya was so brave. She had had a small procedure in the summer to put dye in the joint, so she was aware of what the going to sleep process would entail. She didn’t like it much last time so they gave her a pre-med which made her cry with laughter by the time time she got to theatre mearly from being pushed down the halls and waving at strangers. We left her for nearly 5 hours in theatre, I know this is Anya’s story, but for me those hours were the strangest and hardest of my life. I had complete faith in the team but still there were always risks. It was a struggle seeing her in recovery too as she would not come around and hours later she was still sedated (I think she just liked the sleep). She had also lost a huge amount of blood in surgery and was lucky to not need a transfusion, which will obviously lead to a slower recovery.

The next day the realisation of the extent of what had been done hit home. Firstly Anya was very sick from all the drugs and in huge amounts of pain, the morphine button was being pressed constantly and she went days eventually without eating. The hardest thing to see was that though they assured us the operation was a success she really couldn’t move at all. Though I think part of it was her fear, for the next 48 hours they spent managing her pain and eventually she sat up. The 3 days expected in hospital became a week, but in that time Anya became able to walk with her crutches and was taught to get up the stairs safely.

I am now going to jump to where we are 5 months later. It’s been a long 5 months with the logistics of getting Anya to and from school and catching up on school work. Then there were the few falls that she had (one of which was me throwing her out of her wheelchair – worst mum ever), these falls resulted in a pin that was keeping the plate on her bone in place moving. Her bone growth was also slower than it should have been but we are where we are.

So now, we still have weekly trips to Addenbrookes for physio and just last week we faced our next huge hurdle to overcome. Anya’s legs are now different lengths, to such an extent that more surgery will be needed. I have to say I am pretty devastated but at the age of 12 being told by orthotics you will need to have “special shoes” made for life, I know it is something we will have to do.

In fact Anya will need another 3 operations, 2 (at least) to correct the leg length and one to remove the pins and plate and shave some of the hip bone away at this operation as her physical shape has changed. It is now wonky (her words are “I am like KIm K but only on one side). We knew it may show but not to this extent. There is an element of vanity here but I don’t believe that a girl her age should live with this if there is another option and they will be doing an operation anyway to remove the pins and plate when they shave the bone.

Anya has shown the most amazing amount to courage to get through all this, the time in hospital, missing her friends, the endless appointments, the pain, the scar, having to walk with a crutch still. I don’t think many 12 years olds would cope so well.

We are not at the end of Anya’s hip dysplasia story and so I hope soon to write another blog about a child who can run again. I know that what we have had to do is so that Anya is pain free but I would be lying if I didn’t feel so much guilt about so many aspects of it all. If only I had spotted the issues earlier, if only I had pushed when we had the endless trips to A&E, if only I could be the one going through all this instead of her.

I know that it could be a great deal worse for Anya, and I am well aware that there are a huge number of children (and adults) coping with much more but as a mother I have found this extremely challenging. We are lucky to be where we are, and have the NHS, but I just wish this chapter of our lives will be over soon.

“When I was told I had hip dysplasia I was quite shocked and scared. When the surgeon showed me (on an x ray) what was wrong it seemed really obvious. In some ways I felt relieved because I finally had some sort of resolution to the problem. It was overwhelming, because they immediately started talking about operations, but I felt like I was in good hands.

Now I have had the operation the pain that I had in my hip has gone but I have pain elsewhere because of having the surgery and my (now) uneven legs make my back hurt. I am not nervous about having to have the upcoming  operations but I know that the results are not guaranteed so that scares me a little. I think the biggest issue is that it’s been so frustrating, I can’t do things I want to do, or see people I want to see but I know I am so lucky to have the care I have from the hospital and my family.”

Published by All The Family

Currently a full time Mummy to 3 gorgeous girls, step mum to 4 more fantastic kids and married to sneaker head and all round good guy. Life as a mum and a person is a fantastic journey but also has some challenges, having suffered from mental health issues in the past I try to stay aware of how my mind and body is feeling. I am hoping to explore how my mind works a bit more and open it up to allow it to be calm more of the time (if that makes sense). I like to run and be active (though time limits this), I also loves clothes and shoes but my daily passion is food, it’s the most important aspect of our lives and so I make sure we eat good food (not always healthy) and home cooked and prepared. My girls are what ‘I do’ and I scream daily (not always at them) , long for wine at 11am (I don’t drink it, I always wait till after midday😉) and cry most days (sometimes at Emmerdale)! That’s the truth of me. View all posts by All The Family

Mid 30’s Mum who lives in Essex and loves to write and be creative.

Perhaps a little lost in the world at the mo, but her kids and family keep her nearly sane.